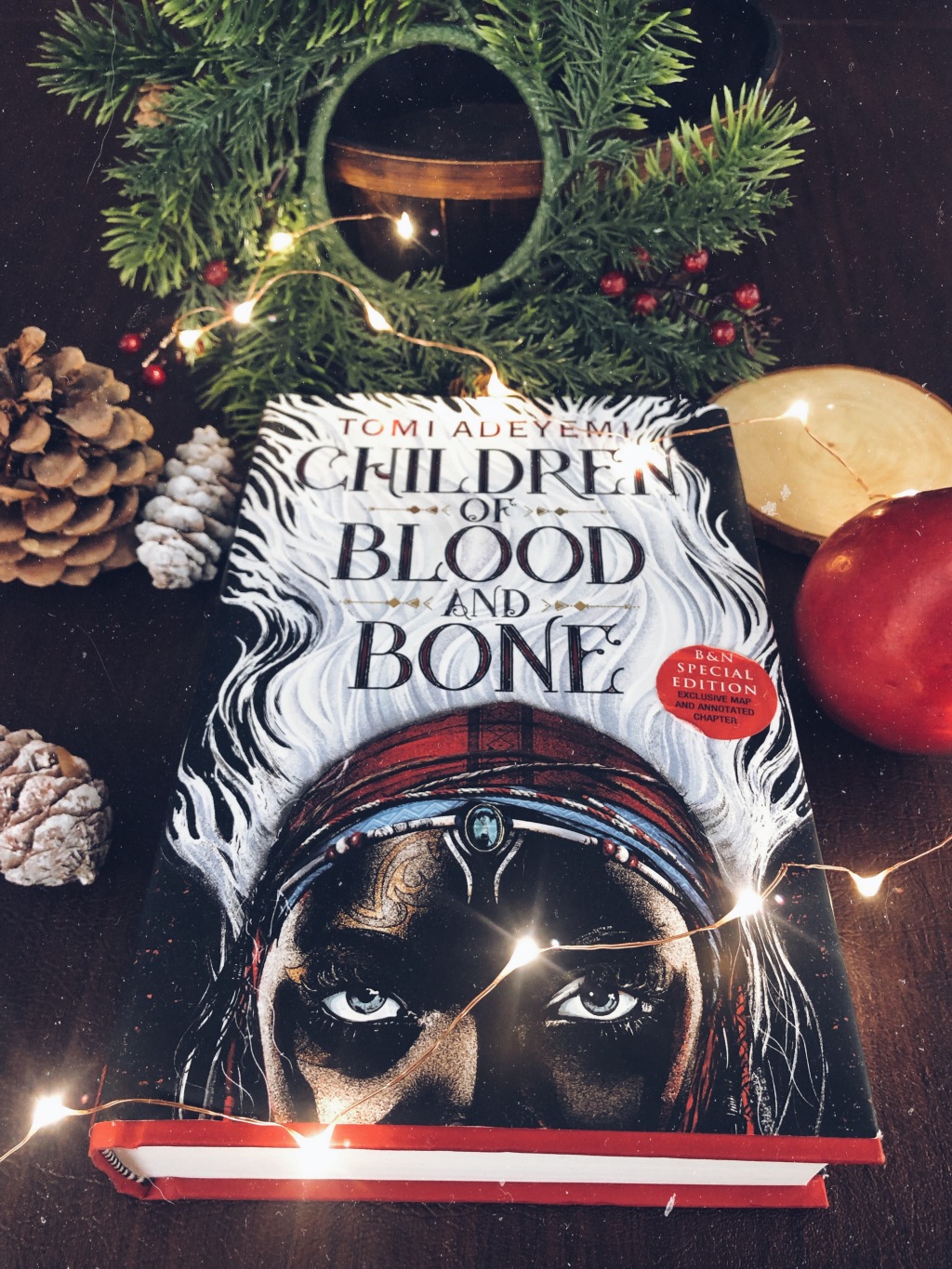 Processed with VSCO with a5 preset

Zélie has one chance to bring magic back to Orïsha and strike a defeating blow to the monarchy that killed her mother and drained all of the maji (magic-wielders) of their powers. On her journey, she is accompanied by her brother Tzain and Princess Amari, whose father ordered the raids that killed Zélie’s mother. The trio is followed by Inan, Amari’s oldest brother tasked with the job of stopping their plan by his father, the King. Zélie’s powers are new to her and she struggles to contain them and to make sense of who she is now; she is physically the most drained she has ever been and the most powerful. She is her best chance and her worst enemy; battling herself along the way because she doesn’t feel good enough to take on the task at hand. Buy the book to find out if she prevails or not.

Tomi Adeyemi specifically creates an imaginary world that alludes to the very real world we live in. The cities are based on the names of real cities—for example, the palace in this book is located in Lagos, a tribute to Adeyemi’s Nigerian heritage—, and the magical leopanaires sound and resemble leopards here. She also thoughtfully creates struggles in the book that represent a love story to the Black experience; throughout the book, she alludes to interracial and intraracial experiences, colorism, police brutality, misogynoir, and natural hair debates. The social critique is woven through with a special kind of precision that snaps you back to reality once you’ve drifted too far away in this magical, fantasy world.

“When your opponent has no honor, you must fight in different ways, smarter ways.” — Tomi Adeyemi

What makes this book so intriguing is that Adeyemi argues this social critique from three different views: Zélie’s, Amari’s, and Inan ’s. Through Zelie’s point-of-view, we see a powerful, young maji torn between love, duty, and impostor’s syndrome. Through Amari’s point-of-view, we see someone trying to do right but who is also acutely aware that she has benefitted from the oppressive system that she is now trying to overthrow. Through Inan’s point-of-view, we are taken on a long struggle between law and integrity (because legal does not always mean right nor does it mean justified). Tzain’s point of-of-view has not yet been shared, so I do hope to see that in the second and third books. With all of the characters, we see oppression and how it affects the oppressors and the oppressed.

One brilliant thing that Adeyemi does in this book is weave together the storylines of Tzain, Amari, Inan, and Zélie. Adeyemi gets you invested with these characters as you settle in for the long ride that is to come, but as soon as you think you know a character or how they will react, she shocks us out of that comfort to change the narrative. She does not give us fantasy tropes and convenience for the story’s sake and that is why I could not put this book down. For this to be Adeyemi’s first novel, it is brilliant work of art that ends on a peak—the cliffhanger on the last sentence left me reeling and going through all of the possibilities of book two. I am excited to see what else Adeyemi is up to and how the characters will continue their journey on the quest for magic and what that means for the rest of the kingdom of Orïsha.